Anyone who missed sandwiches after going gluten free, please stand up. That’s, like, basically everyone, right?

Yeah, I thought so. 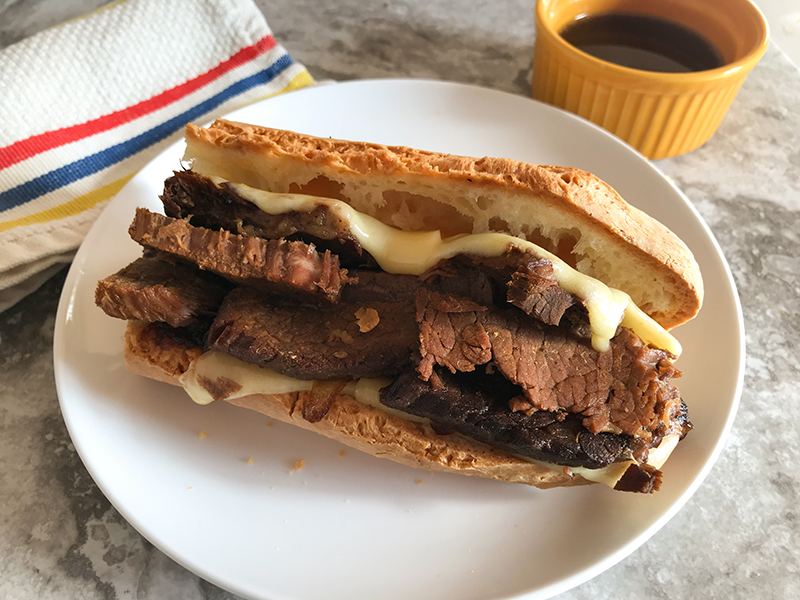 Thats because it’s SO intimidating when you first go gluten free to convert your favorite recipes. You don’t know what bread is good and for what, you don’t know which sandwich fillings are okay, and maybe nothing in your entire kitchen is even safe for you to eat. And if you’re not someone who is used to cooking the majority of your meals it’s even worse because it’s like you’re re-learning how to be an adult and feed yourself. 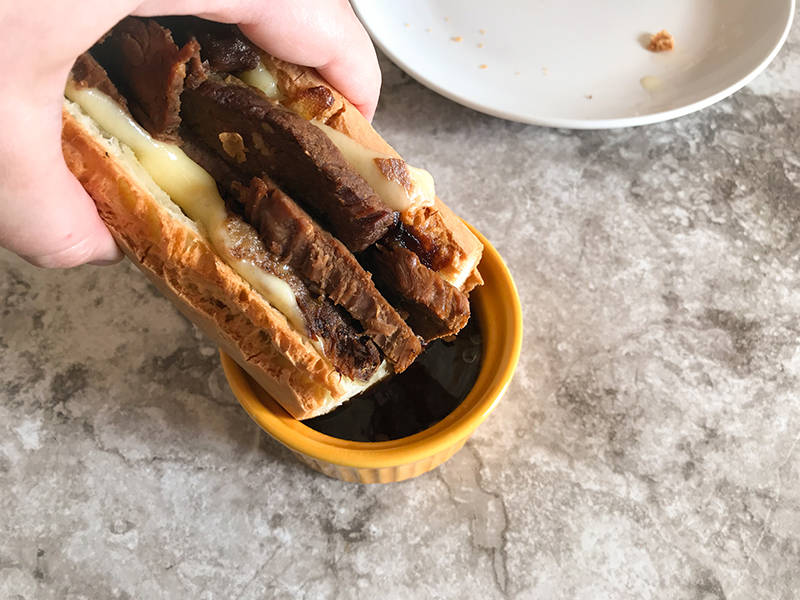 Well, no more! Because this French Dip recipe is easy and amazing and 100% gluten free. Although, if you don’t eat gluten free, it’s totally easy to adapt to a non-GF diet.

It’s seasoned roast beef simmered in a savory broth, topped with melted Swiss cheese and caramelized onions on a crusty baguette. It’s everything a good sandwich should be. And the au jus is out of this world. 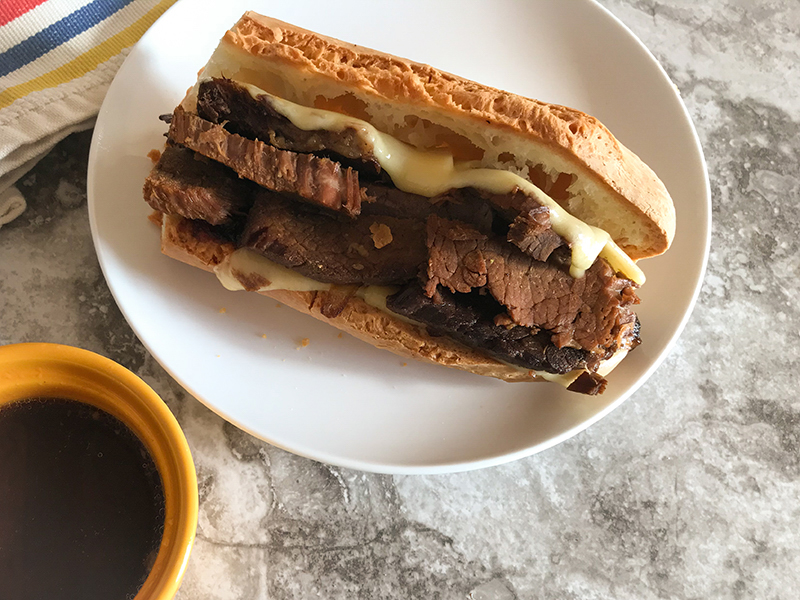 And as if it wasn’t already great, it’s basically a set it and forget it recipe. You don’t even need to brown the beef first (and I’m a browning purist, so believe me when I say that it’s unnecessary in this recipe). One pot. Easy!

I debated not posting this recipe because it’s not exactly hard to convert a sandwich recipe from any blog or book out there, but then I thought, no, this should be here! Because it’s good comfort food and that’s what people need when they first undertake this diet. Or all the time, because the need for comfort food never dies. 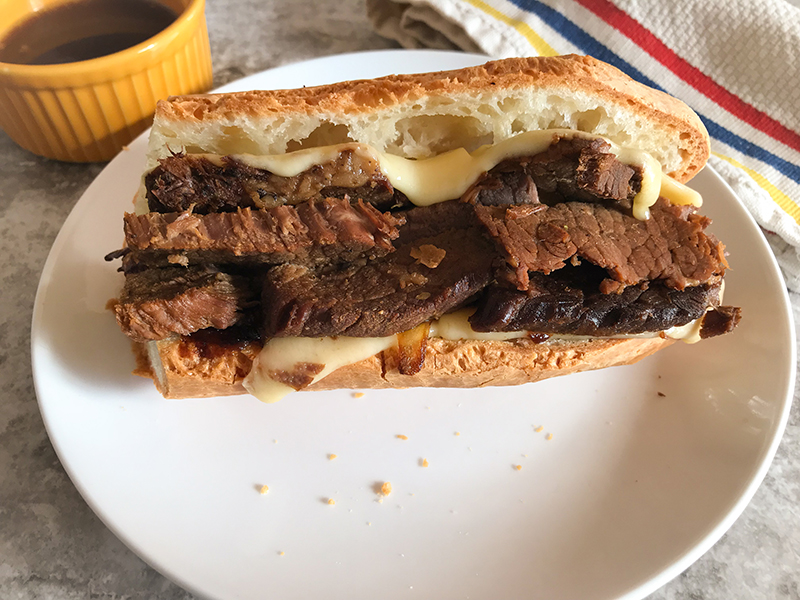 And, honestly, this French Dip is so good you’ll temporarily forget that you are even eating gluten free, and ascend to the heavens.

Okay, maybe not that last part. But if it were possible, this French Dip would cause it.

Plus the customization options are never ending. I included optional caramelized onions in the recipe, but you could also add:

And so much more! 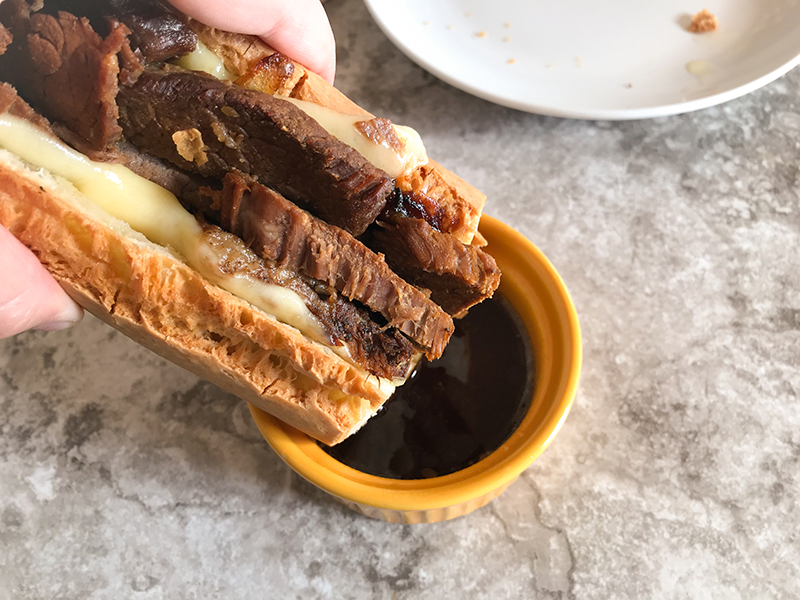 Alright, let’s get going, shall we?

This recipe has been adapted over many uses and to be gluten free from a recipe by Carlsbad Cravings. 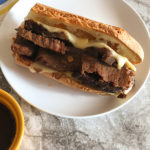 *I used Against The Grain gluten-free baguettes. They come in a package of 2, and each baguette makes 2 sandwiches. I found them in the frozen bread section of Whole Foods.

**Not all Tamari is gluten free, and not all gluten free soy sauce is created equal. Check your labels and stay away from things with added sugar.

Chicken broth base is either powdered or a paste, similar to bouillon cubes, but with a more concentrated flavor. Orrington Farms and Better Than Bouillon make good gluten free versions. You can also use beef base, but personally, I've never met a beef base I liked as much as chicken base, even in beefy recipes.

I did not add any additional salt to this recipe because the beef broth, chicken base, and soy sauce add enough salt, but if you use low/no sodium versions of these, you may need to salt to taste. 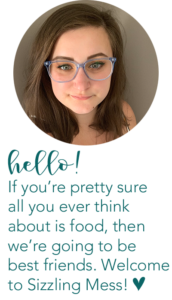